The Australian dollar corporate debt market finished the first half of 2020 with a flurry of deals and greatly improved sentiment. Corporate originators do not expect the floodgates of issuance to open in the second half but say conditions should be supportive for active issuers.

Australian dollar corporate supply in the first half of 2020 was A$4.5 billion (US$3.1 billion). More than A$1.8 billion of this came in the final week of June (see table).

This clutch of deals brought first-half corporate issuance to around the long-run average despite the freeze on new issuance during March and April (see chart 1).

The shape of the market in 2020 has tended to be a smaller number of generally somewhat larger deals. According to KangaNews data, in the first half of 2018 there was A$4 billion of supply from 16 individual corporate issuers. In 2019 it was A$5.4 billion from 17 issuers during the first half. This year’s first-half volume came from just 11 borrowers.

Credit market conditions have improved markedly from March-April. Market sources point to lack of supply relative to redemptions in the corporate and broader Australian debt capital market and support from the Reserve Bank of Australia (RBA) as main drivers of much tighter pricing and investors seeking to redeploy cash in the market. 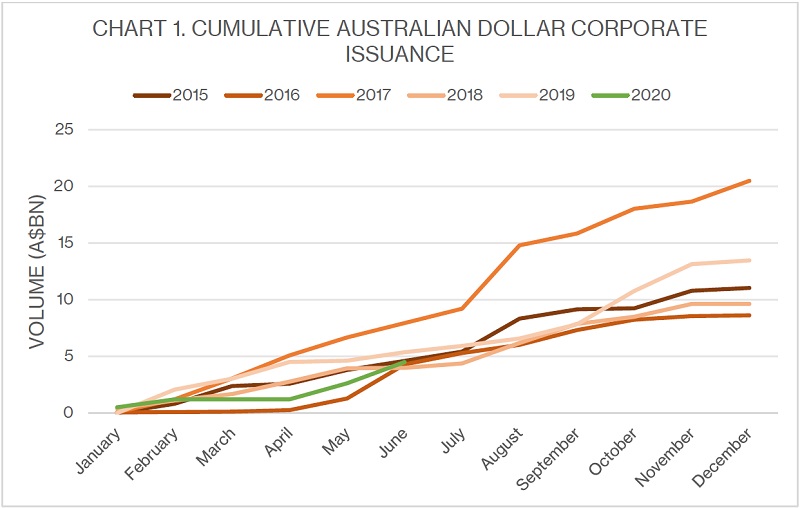 Desmond Fennell, head of global syndicate at Commonwealth Bank of Australia (CommBank) in Sydney, tells KangaNews the turning point was early access to superannuation undershooting most expectations. In March, uncertainty around the scale of uptake forced much of the Australian asset-management community to carry high levels of liquidity in advance of potential redemption requests.

“The deals that have come since Woolworths reopened the market in May have given additional data points for various sectors and tenors. These have been defensive names and we are very constructive on the market for borrowers of that ilk. Investors recognise critical infrastructure, defensive assets and nondiscretionary consumer companies, and can see through this crisis,” Block tells KangaNews.

Even so, corporate spread tightening has lagged parts of the Australian dollar market with more explicit government and central-bank intervention. Financials in particular have rallied with the additional supporting factor of an expected lack of supply from the domestic big-four banks.

The RBA has moved to support the corporate market by making investment grade corporates repo eligible. Market participants tell KangaNews this has so far had only a marginal impact, though the technical factors supporting the wider market are now also supporting corporate spreads.

One of the main ones is undersupply. Australian dollar credit redemptions in 2020 are greater than in previous years (see chart 2). Gwen Greenberg, head of corporate debt capital markets at ANZ in Sydney, says lack of supply is creating a strong tailwind for corporate issuance.

Demand for corporate deals appears to have returned from all corners and is indicative of Australian market developments in recent years. Tabitha Chang, director, debt capital markets origination at National Australia Bank in Sydney, tells KangaNews recent deal books have exceeded what was typical last year. This may be a function of limited supply, but Chang says the amount of cash in the system and inflows to credit funds are also contributing.

International investors generally pulled back from allocations in Australia during the peak of the market crisis, but now offshore investor demand for Australian corporate deals has also come back strongly. Penny Schubach, director, debt capital markets origination at CommBank in Sydney, says bids from Asia and Europe have been particularly strong but have not necessarily been reflected in deal distribution statistics thanks to the activity level of local real money.

Bids from Asia have been particularly important in the development of the Australian dollar corporate market in recent years. Chang says NAB research into corporate book dynamics between 2015 and 2020 show the average number of investors in a corporate deal has risen to 63 from 38. Meanwhile, participation from offshore accounts has risen to an average of 40 per cent of orderbooks compared with around 25 per cent in 2015.

Brad Peel, director, capital markets origination at NAB, says a broader investor base gives issuers confidence. “Having more investors in the mix means more certainty on price, as borrowers are less likely to need to move pricing in order to get every bid available and achieve their desired volume.”

Demand appears to be particularly robust at 10-year tenor, another part of the market that has been building in recent years and now appears entrenched due to ultra-low front end rates. The make-up of corporate supply in 2020 has for the first time been weighted to 10-year maturity and longer (see chart 3).

Greenberg says the technical drivers of demand have brought secondary market performance across the curve but have been particularly strong for 10-year deals as investors seek higher-yielding assets.

Long-end demand at the beginning of 2020 facilitated two 12-year transactions – for Dexus Finance and GPT RE. Block says several points on the curve are open and is confident of support for the right issuers eager to test the market for 12-year tenor. Demand has clearly returned to the Australian dollar corporate market and conditions are conducive to issuance. However, the supply picture remains unclear given many corporate borrowers sought increases and extensions to bank facilities in March and April.

Peel explains that some corporates accessed short-term liquidity or drew on existing facilities in the bank market, either of which they may look to term out in the coming 6-12 months. However, others were able to secure medium-term loan liquidity and may be happy to stay out of capital markets for the time being.

Peel adds, though, that many corporates, either through maturing debt or establishing new bank lines, will have shortened the maturity profile of their overall portfolio. The opportunity to re-lengthen with public deals could prove attractive.

After Brisbane Airport priced its deal on 23 June, the issuer told KangaNews it had already raised short-term liquidity to deal with COVID-19-related funding needs. However, it maintained commitment made to come to debt capital markets prior to the crisis unfolding to refinance an upcoming Australian dollar public-market maturity.

WSO Finance’s deal was also the return of a mandate made earlier in the year. There is a sense that the return of these deals has offered some catharsis and confidence to market participants, particularly given Brisbane Airport is in a sector severely affected by the crisis. Fennell says the ability of the market to support names that have been affected by the crisis is indicative of the appetite for credit.

Originators remain cognisant of risks on the horizon, though. Block says borrowers should consider taking advantage of strong conditions while they last. “There is strong demand at the moment, but this is a new environment and the goalposts have shifted. The extraordinary overall government support and the RBA’s interventions have been very supportive and helped the market improve since March, but we know we are not yet at the end of this crisis.”

Domestic and global headline risk events appear to be accumulating in the fourth quarter of the year, when much of the government stimulus is scheduled to be unwound and the US presidential election comes to a climax. Meanwhile, markets are likely to remain susceptible to surges in COVID-19 infections.

Greenberg expects Australian dollar supply may be weighted to the third quarter after corporate reporting season. “Investors may want to tackle any potential supply sooner rather than later, and issuers may be inclined to do so as well.” Australian dollar primary market syndicated supply has been muted in the first two weeks of 2021. The two traditional sources of early-year supply are largely missing, and technical factors are largely set against high-grade supply. The bright spot, intermediaries say, is that secondary market dynamics are gradually swinging in support of primary issuance.

On 14 January, Mercedes-Benz Australia Pacific (BBB+/A3/BBB+) launched an Australian dollar denominated, three-year EMTN deal, via Commonwealth Bank of Australia and TD Securities. The transaction has indicative volume of A$100 million (US$77.5 million) and price guidance of 75 basis points area over semi-quarterly swap. Pricing is expected on the day of launch during London hours.