The Australian Office of Financial Management (AOFM) has intervened in the Australian securitisation market since March through its structured finance support fund (SFSF), which facilitated significant securitisation deal flow in the mid-part of 2020. The AOFM is further enhancing its market support with the introduction of its forbearance special-purpose vehicle (FSPV).

The SFSF is designed specifically to help nonbank and smaller bank lenders access funding during the COVID-19 crisis. It has been flexible to meet industry needs and was quickly deployed, with nearly a quarter of its A$15 billion (US$10.9 billion) allowance invested by the start of September.

The SFSF was one of a suite of government and central-bank stimulus measures announced on 19 March to help bridge Australia’s economy to the end of the COVID-19 pandemic. The enabling legislation received royal assent within a week.

The purpose of the SFSF investment is to maintain the flow of credit to smaller bank and nonbank lenders that depend primarily on securitisation markets for wholesale funding. The goal is to make it possible for these lenders to continue supplying credit to the wider economy.

The current crisis is not the first time the AOFM has supported wholesale funding in the securitisation space. It intervened in the Australian securitisation market during and after the 2008 financial crisis, purchasing asset-backed deals in the primary market from issuers other than Australia’s big-four banks and Macquarie Bank.

This time around, the government debt-management agency’s remit is targeted at smaller credit providers that do not have access to the cheap debt funding of the Reserve Bank of Australia’s term-funding facility.

So far, the SFSF has primarily invested in nonbank securitisation structures. Only one authorised deposit-taking institution has been funded through the SFSF – neobank lender, Judo Bank.

The AOFM’s investment scope for the SFSF is also broader than it was during the financial crisis. The earlier programme could only buy residential mortgage-backed securities (RMBS) issued in the primary market, and then only at triple-A level. In 2020, the investment mandate allows allocations in the secondary market, to warehouse vehicles, across asset classes as long as they meet SFSF investment guidelines (see box), and at any place in the capital structure of deals aside from first-loss notes.

More recently, the AOFM has also been empowered to support existing securitisation structures through the FSPV.

The SFS Act states that the SFSF must make its investments according to government direction regarding strategies and policies, decision-making criteria, and risk and return.

Furthermore, investments must be structured not to restrict renegotiations of arrangements for making payments under contracts for credit and must allow lenders to provide forbearance to debtors.

The investment decision-making criteria include consideration of whether the investment affects other participants in the securitisation market for smaller lenders, whether the rate of return is less than the market rate, and whether it is reasonably required.

Finally, SFSF investments must have an acceptable level of risk, including to the Commonwealth balance sheet, and aim to achieve a positive net financial return over the medium-to-long term.

The AOFM’s focus has evolved rapidly since it first deployed SFSF funds in March, in line with priorities dictated by the COVID-19 crisis. The first investment, in a Firstmac RMBS deal, came the day after legislation was passed by federal parliament.

The initial priority was to help get transactions that were close to execution when the crisis hit over the line. To achieve this, the AOFM targeted SFSF investments at gaps in structures in such a way as not to crowd out third-party investors.

From May, the agency focused its efforts more in the secondary market (see chart) – where an overhang of paper was preventing investors from considering participation in new deals or in warehouse vehicles.

Real-money accounts have played a more significant role in Australian warehouses in recent years, picking up the slack where banks have had to withdraw from mezzanine exposures in particular. Issuers say third-party investors sought warehouse exits during the height of the crisis, however – creating a gap the AOFM sought to help fill.

Pressure on secondary and warehouse securitisation markets persisted in April and May even as March’s market volatility subsided. This was largely a by-product of the call superannuation funds made on investment managers to provide early access to retirement savings – an additional part of the government’s COVID-19-relief suite of measures. 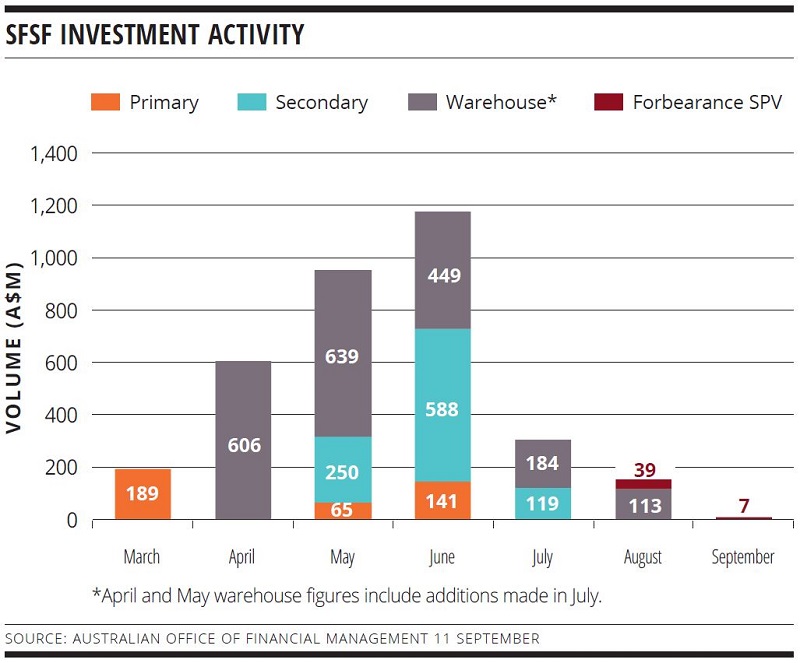 Liquidity demands from superannuation funds have eased since June, market users report, at the same time as loan quality has rebounded. This picture of improvement on both sides of the book, with a backstop of support from the SFSF, has allowed for a steady pipeline of securitisation transactions – primarily from nonbank lenders – and across multiple asset classes including auto and commercial-mortgage loans.

Most deals have priced without direct SFSF involvement and, since July, without even AOFM support of secondary-market switches. However, KangaNews understands the AOFM continues to be prepared to get involved in the issuance market as and when it is needed again.

The FSPV is the most novel component of the SFSF remit. It allows the AOFM to inject liquidity into securitisation structures that are affected by the provision of hardship arrangements to nonbank lenders’ customers. The FSPV became operational in August following a rapid implementation period since the idea was first floated and an Australian Securitisation Forum (ASF) working group established to assist its development in the early months of the crisis.

The catalyst for establishing the vehicle was a March decision by government, regulators and industry bodies to provide leeway to lenders as they provide their customers with payment holidays or other forbearance arrangements. The ASF was keen for nonbank lenders to be able to provide this support to customers without imperilling the quality of existing securitisation trusts, which could be subject to downgrades or losses in the event of large-scale disruption to cash flows.

The AOFM worked with the ASF and other stakeholders to devise a vehicle that would provide the greatest good to the greatest number in the market. It settled upon a single SPV to cater to all lenders and asset classes as long as they meet the SFSF’s investment criteria, including its stipulation that funds deployed must be investments rather than grants.

Crucially, this means the AOFM will not engage in support for structures where it deems there is a risk of lenders not being able to repay the funds invested by the SFSF.

The FSPV has a class A variable funding note with an interest rate of 5 per cent, to which the SFSF is the sole subscriber. Meanwhile, participating lenders will subscribe to a class B note, the size of which is determined by the commitment required by the individual lender.

The amounts subscribed to in the class B note effectively act as a first-loss collateral account, but funds contributed by lenders are not available to other originators. The FSPV will cover up to 90 per cent of missed interest payments on loans directly affected by COVID-19 but not missed principal payments, fees or other charges.

Eligible lenders can draw on the FSPV until 30 March 2021, but eligible loans must have been originated prior to 30 September 2020. After 30 March 2021, participating lenders will begin paying back the committed funds.

Many nonbanks have highlighted the value of the FSPV as an emergency backstop that provides confidence to investors while also stating that their goal is not to draw on it. Several lenders have gone through the process of applying for eligibility to draw FSPV finds while stating that this is purely a precautionary measure. As of mid-September, the FSPV had committed a total of just A$45.5 million across four lenders.