As well as a clutch of mainstream corporate bond deals, the New Zealand market welcomed the return of corporate green-bond issuance in September. Mercury reopened the market with the first deal in nearly a year, followed in a matter of weeks by a third green-bond transaction from Argosy Property.

Argosy’s NZ$125 million seven-year green deal, priced on 16 October, is its largest since it debuted in the public market in early 2019. This transaction had ANZ, ForBarr, Hobson Wealth Partners, Jarden Securities and Westpac on the top line.

Mercury’s debut is the first green bond in the New Zealand market since an Argosy deal in October 2019. The proceeds from Mercury’s deal are primarily earmarked to support construction of the Turitea wind farm – which, when completed, will provide 2 per cent of New Zealand’s electricity needs.

Geoff Smits, acting treasurer at Mercury in Auckland, tells KangaNews the issuer began working on its green financing framework in March this year. “The framework reflects our desire for positive environmental and economic outcomes. Our mission is energy freedom: we want New Zealand to make the most of its renewable-energy advantage and to realise a low-carbon future for all,” he explains.

Smits says eligible assets for the pool are in the wind and geothermal sectors. The total value of assets in the pool is NZ$1.9 billion and it will be able to support further green-bond issuance in future. Mercury’s hydro assets are not currently part of the pool, Smits adds, as they are not yet covered by CBI criteria.

The question for Mercury was whether it was necessary or valuable to seek green certification on the assets of a 100 per cent renewable-energy provider. Patrick Mullins, Auckland-based director, debt capital markets at ANZ, insists labelled bond issuance is still worthwhile.

“Most investor feedback we received was that Mercury’s underlying business was overwhelmingly green, but the CBI green-bond certification allowed for the broadest panoply of investors to participate,” he says.

The New Zealand market has always been supportive of labelled green, social and sustainability (GSS) issuance but Mullins tells KangaNews thinking is evolving on the issuer side. “What has changed since 2019 is that the discussion with issuers, particularly at board level, is no longer about why should they undertake a GSS bond but why they shouldn’t,” he reveals.

New Zealand corporate issuance was quiet for most of 2020 until Wellington Airport broke the ice on 7 August. Since then, and despite new COVID-19 lockdown measures, deal flow has returned in force. Deal sources say pent-up investor demand has rushed in to support new issuance.

Like the corporates that issued before it, Smits says Mercury had been targeting an earlier execution date but deferred coming to market until conditions improved.

Its deal launched with an indicative margin range of 125-145 basis points area over mid-swap and eventually printed at the tight end of guidance. According to KangaNews data, Mercury’s transaction printed the lowest-ever coupon for a public deal in New Zealand – though this record lasted for barely a fortnight (see table 1).

Mullins says the retail investor base was surprisingly supportive of a deal that offered a coupon more or less in line with term-deposit rates. The book saw a high level of uptake from retail brokers alongside the institutional bid (see chart). The prospect of a lower-for-longer rates environment combined with the Mercury name to drive the retail investor bid, Mullins adds.

Smits says Mercury’s future borrowing needs will primarily to be refinancing. The company has a NZ$300 million wholesale bond maturing in September 2021, and Smits reveals that the issuer is still considering refinancing options. It is likely to issue further green bonds in future now its green-financing framework is in place. 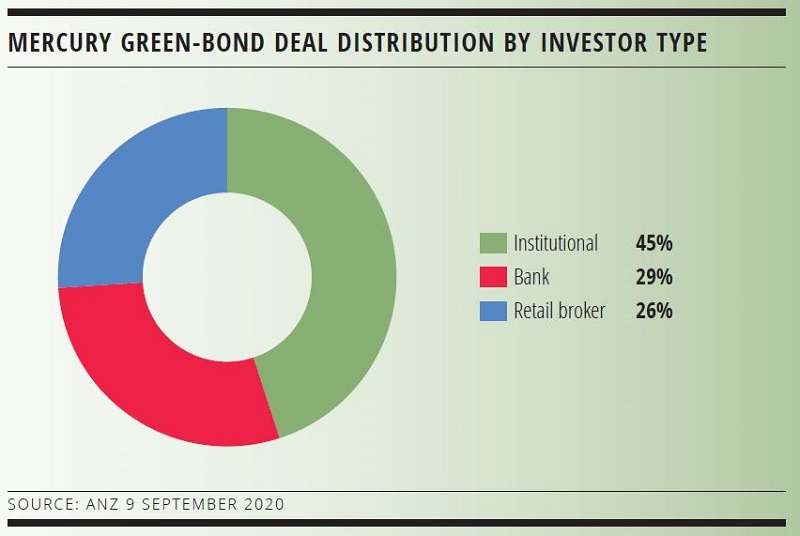 Argosy, meanwhile, says its third green-bond deal attracted a good spread of investor interest and tighter pricing than comparable issuers’ conventional bonds. The borrower says the green label is one reason for the positive demand outcome.

Combining its three green deals, Argosy has tapped the market for more volume than any New Zealand corporate issuer except the large energy companies since the start of last year (see table 2).

Dave Fraser, Auckland-based chief financial officer at Argosy, says demand increased with each of its three green-bond deals priced since March last year. Retail demand has continued to build and formed the bulk of the book for all three transactions, driven by tumbling bank-deposit rates. But Fraser says institutional interest is also robust. All Argosy’s deals had seven-year tenor at pricing. The margin on the latest is 195 basis points over mid-swap, compared with 175 basis points in its first two deals. However, the decline in real interest rates over this period has seen coupons fall precipitously, to 2.2 per cent this time around compared with 4 per cent in March 2019 and 2.9 per cent in October 2019.

Fraser also says the pricing of Argosy’s recent deal was sharper than for recent issuance by similar borrowers and that this could be a product of the green label.

Argosy’s issuance frequency may slow from here as its debt is now split nearly 50-50 between bank and capital-markets funding. The NZ$325 million of green bonds also accounts for most of its NZ$370 million qualifying asset pool.

Fraser tells KangaNews further assets are in the pipeline, though. “Our green-bond programme is aligned with our green-building strategy, which is a path the business has been on for 10 years and continues to create incremental value for shareholders,” he explains. “We are developing new green assets, which when ready will be included in the programme. Even so, another transaction may not occur for a couple of years.”

The economics of commercial property in New Zealand are different from most other parts of the world as the country has effectively eliminated COVID-19, at least for the time being, and fully reopened following a strict initial countrywide lockdown and secondary Auckland lockdown in August.

Fraser reveals that investors are interested in how Argosy’s property portfolio performed through the lockdowns and how it has emerged. The issuer is able to present a positive story on both counts, he insists.

“Argosy offered rent abatement or deferral arrangements for tenants most in need during the lockdowns, but the diversity of our tenants mitigated this risk. Government accounts for 27 per cent of our rent roll and a lot is also essential services. Following the lockdowns Argosy has lost just one small tenant – out of 177,” Fraser says.

An investor newsletter published on 28 September shows industrial and office space each have a 43 per cent share of Argosy’s total property portfolio, with retail accounting for the remaining 14 per cent. The newsletter also disclosed that the company had a 99.4 per cent occupancy rate across its portfolio as a whole.