The transaction is easily the largest green bond ever printed in the Australian dollar market, more than doubling the previous record of A$750 million (see chart 1) – achieved by Queensland Treasury Corporation in March 2017 and replicated by European Investment Bank in January 2018. ANZ, Bank of America Merrill Lynch and National Australia Bank (NAB) led.

Demand was easily sufficient to exceed TCorp’s initial ambitions for the transaction. The issuer announced minimum volume of A$500 million for the deal and was aiming for final size of A$1 billion, according to Paul White, Sydney-based global head of capital markets at ANZ. It exceeded both, based on a book that grew to A$2.6 billion at final price, and White says the deal’s scale will offer “much needed liquidity” for the sector.

He also highlights the diverse nature of the book (see charts 2 and 3). “Semi-government deals are normally dominated by large bank balance-sheet orders, which was definitely not the case this time,” he explains. “Real money was very prominent in this book, including very large and diverse orders, and it is clear that offering a deal of this type increases asset-manager demand.”

Supporting factors for the positive buy-side response include the fact that this was TCorp’s first sustainability-themed offering and the deal’s tenor, White tells KangaNews. It is also Australia’s first semi-government green bond with 10-year tenor – which White says is the sweet spot for this sector around pricing time.

Green-bond market participants have long agreed that supply rather than demand is the biggest constraint on market growth, in Australia and globally. TCorp was able to debut with scale that significantly moves the dial on total green-bond outstanding volume in Australia. Its green bond added nearly 20 per cent to total supply of Australian dollar sustainability-themed bonds according to KangaNews data, bringing aggregate volume to A$9.7 billion.

This was possible in part because of the integration the NSW state government has developed between its vast infrastructure programme – which amounts to A$87.2 billion over four years, including A$51.2 billion of transport-related investment – and sustainable finance.

TCorp and a team from the NSW government have identified a “longlist” of projects to which the treasury corporation lends and which are suitable for earmarking against green, social or sustainable bond issuance. The issuer selected three of these for inclusion in the eligible project pool for the debut transaction: the Sydney Metro North West and Newcastle Light Rail mass-transit projects, and the Lower South Creek Treatment Programme – specifically the Quakers Hill/St Mary’s water recycling plant process and reliability renewal projects. David Jenkins, director, sustainable capital markets at NAB in Sydney, explains that the pool of three eligible projects earmarked against the TCorp green bond is in excess of A$4 billion in size.

By contrast, Queensland Treasury Corporation (QTC) and Treasury Corporation of Victoria made their green-bond debuts with supporting eligible-asset pools totalling less than A$2 billion each. Jenkins also notes, though, that the other states have added assets since making their issuance debuts and QTC’s pool now rivals TCorp’s in size.

Katherine Palmer, senior manager, funding and balance sheet at TCorp in Sydney, says the scale of NSW’s infrastructure programme meant the borrower could debut with a substantial transaction based on just three underlying assets, as well as having a shortlist of accreditation-ready assets for future issuance. For instance, in total TCorp is funding half the A$8.3 billion total size of the Sydney Metro North West project – partly through the green bond.

There are still limits on issuance scale, however. The green-bond transaction accounts for more than a quarter of TCorp’s A$6.6 billion annual funding task for 2018/19, and while the issuer has a substantial suitable asset base for further green-bond issuance Palmer says it has not made any formal commitment regarding future deals with respect to proportion of the overall programme or frequency of issuance in any format.

“The programme has been established to enable programmatic issuance. As such, we will issue again – but when and how we do so will be guided by the market,” she tells KangaNews. “We went with a sustainable bond programme to allow us to issue green bonds, social bonds or bonds with components of both – in line with the state government’s focus on social outcomes.”

“The feedback from investors in Australia and offshore is that ESG is spreading on the buy side, from a top-down ad bottom-up perspective. We are encouraged by the presence of green-bond specific mandates but also by those that look at ESG on an issuer-entity level.”

In the meantime, the buy-side response to TCorp’s transaction validates the approach it took to its programme and, once again, the potential demand for green bonds in Australia.

Katharine Tapley, head of sustainable finance at ANZ in Sydney, comments: “TCorp’s combined green and social approach was very well received – I would say welcomed – across the roadshow and no investors were kept out of the deal on this basis. Notwithstanding the first deal is a green bond, there was a lot of enthusiasm about the concept, based on the recognition that transitioning to a lower carbon, more sustainable economy requires addressing social as well as environmental issues.”

Australian dollar green bonds are yet to offer issuers a consistent pricing advantage over conventional issuance, and White confirms that TCorp’s new issue priced in line with its curve. In this context, the main benefit for issuers is the ability to tap investors that might not normally participate in its issuance or only do so in smaller size.

For TCorp, investor diversification was achieved by the large proportion of real money in its book. Like other Australian dollar green-bond issuers, however, the “dark green” component of the book – investors with specific, positively screened environmental, social and governance (ESG) mandates – was at the margin (see chart 4).

Palmer acknowledges the emerging state of the dark-green investor base in Australia but hopes TCorp’s deal can contribute to its development. “Until our transaction there was only about A$8 billion of green bonds on issue in Australia, which obviously limits the ability to establish and grow specialist funds. When there’s more issuance, it could encourage funds to grow.”

Tapley agrees that supply is critical. She tells KangaNews: “The issue of supply is a factor holding back further development of specific mandates and it will continue to be a challenge. However, we have noted an uptick in local investors at least engaging in ESG integration and we know anecdotally that asset managers are increasingly being asked to manage specific mandates.” Overall, Tapley suggests the Australian investor base is actually now evolving faster in the ESG sector, saying it "had some catching up to do but is doing it quickly”.

Palmer adds: “The feedback from investors in Australia and offshore is that ESG is spreading on the buy side, from a top-down ad bottom-up perspective. We are encouraged by the presence of green-bond specific mandates but also by those that look at ESG on an issuer-entity level.”

Jenkins also argues that the nascent state of the local dark-green investor sector does not reflect the extent of ESG evolution on the local buy side. “Every roadshow we have been involved in since we brought the first NAB green bond in 2014 has a larger number of investors, domestic and from offshore, that are familiar with the sector and that could be labelled dark green. We are no longer educating investors on the nature of green bonds: they are engaged, interested, incentivised and have a deep understanding of the detail.” 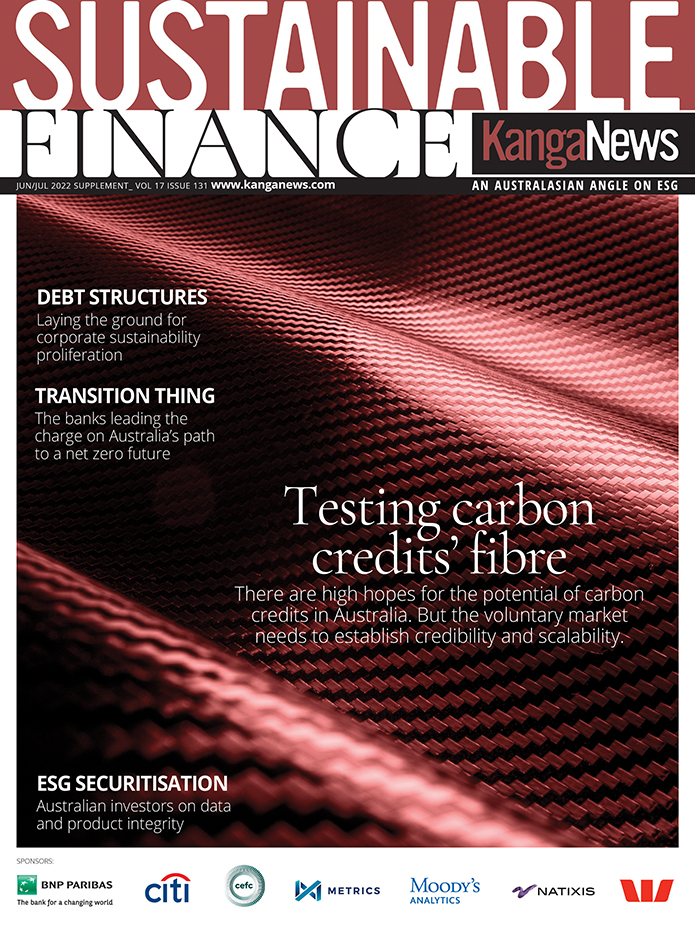